Pastor Scott Lively, an independent candidate for Governor of Massachusetts,  shocked the other politicians and audience members at a televised candidate forum on "LGBTQ issues" at the Boston Public Library on March 25. Rather than join in the pro-"gay" chorus, Lively described the truths about those behaviors from a medical, sociological, and biblical standpoint. It was a cold dose of common sense that few there had likely heard before.

The forum was held in the Boston Public Library on March 25. It was jointly sponsored by the homosexual lobby group MassEquality and the left-wing public television station WGBH. All of the declared candidates for Governor participated except the two Republicans, Charlie Baker and Mark Fisher.

All seven of the other candidates for Governor -- both Democrats and Independents, including the current state Attorney General and Treasurer -- enthusiastically voiced their support for the homosexual and transgender agendas  and their willingness to advance them in the state if elected.

For most people it's particularly frightening to see the extent that many politicians are willing to bow to the radical homosexual and transgender movement without seemingly any second thoughts. Few pro-family people realize that.

But Lively told the group that as governor he "would ban LGBT propaganda to children." Regarding laws supporting transgenderism he said, "It's perfectly rational and reasonable to exercise discrimination on those grounds . . . We should be helping people to overcome this and not encourage those who persist in the delusion."

The hostility during the event against Lively was fairly dramatic. The crowd of about 150 appeared to consist overwhelmingly of pro-homosexual supporters. There were also about 6-12 Lively supporters there. But just about every time he spoke he was interrupted by loud, rude noises from the audience, which the moderator made little effort to stop. It's been observed that homosexual activists are emotionally much like 10-year-olds, and that was certainly evident there. (Even then, this was actually more orderly than other venues. At least the activists stayed in their seats this time!)

The audience entering the auditorium just before the forum begins.

In addition, the other candidates were visibly annoyed with Lively's straight talk. At one point during the debate, Independent candidate Jeff McCormick, who spoke right after Lively, sneered at him and said, "I should win an award after this. Someone owes me a martini."

But watching this was a clinic on how to fight back in a seemingly overwhelming situation. It wasn't an easy venue for any pro-family politician. But Lively took it in stride. He did not take any of the hostile bait thrown at him, nor did he veer from his calm but forceful demeanor. This seemed to make his message all the more powerful.

WATCH THE VIDEO of the forum HERE. (1 hr 25 min.)
Just watching the first several minutes shows you all you need to see! 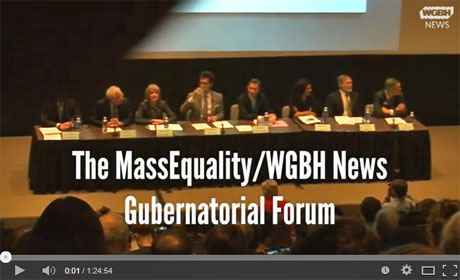 A few of the questions and answers from the forum

Here is a sample of three of the questions, and how various candidates (and Lively) answered them.

Q. How do you plan to use your role as governor to make Massachusetts the best place for LGBTQ people to live? And how would you tout these initiatives across the country? And how would you use the governor's office as the bully pulpit?

Joe Avellone. I'm going to have an LGBT Summit yearly to understand the evolving positions and create an LGBT agenda from the governor's office that we will use in the Legislature to make sure that we keep advancing the agenda.

Attorney General Martha Coakley. We just passed the amendment to the bullying bill and we'll make sure it's implemented in the corner office to make sure that LGBTQ children get all the help they need to be good students and have a good future.

Evan Falachuk. The Mass LGBTQ Commission for Youth laid a pretty thorough agenda of items that need to be taken care of. As governor I'll appoint an assistant secretary and someone who's a program manager. You need someone in charge of quarterbacking to make that happen, and that will be a big part of my agenda.

Scott Lively. As governor I would ban LGBT propaganda to children. This is a law that I advocated for in Russia. They have found it to be successful for their society. There remains no objective proof that homosexuality is innate and unchangeable despite decades of effort which means that it is an acquired condition. We must assume that that's true and if that assumption is true, then it is extraordinarily irresponsible to be treating our children as guinea pigs in a massive social experiment. They should be protected from the promotion of homosexuality as good, normal alternative choice for themselves.

Q. Do you support non-discrimination protection for transgender people in public places or accommodations? If so, how do you respond to arguments opposing these protections that provoke controversy and allege public safety issues?

Jeff McCormick. Absolutely I support that. It actually makes my skin crawl to understand how some people can take a segment of our population [and discriminate against it] . . . If I'm having a Catholic wedding or if I'm having a bar mitzvah, it doesn't make sense to me how someone can selectively discriminate in our society at all. To me this is an absolute no-brainer.

Scott Lively. Discrimination based on race, ethnicity, or nationality is completely irrational because those things are morally neutral. But sexual conduct is not morally neutral. And has serious public health, sociological, moral implications. Its perfectly rational and reasonable to exercise discrimination on those grounds. So all the arguments attempting to compare race with homosexuality and transgenderism are simply comparing apples and oranges. I think transgenderism is clearly self-evidently dysfunctional and thus it is simply insanity for our society to be embracing it as a normal variant of human sexuality. We should be helping people to overcome this and not encourage those who persist in the delusion.

Juliette Kayyem. Absolutely I would support an inclusion of transgender. Let me be clear on the transgender issue. We can respect other view points, but we're on the right side of history here. Anyone who has lived the last 20, 30, 40 years know that we are on the right side of history. There is only one way forward in Massachusetts, let alone the United States, and its going to be to include transgender, non-conforming gender, however you want to describe the anti-discrimination statute. We should be ahead of this and we are not.

Q. May 2014 is the ten year anniversary of marriage equality. Yet state data shows persistent disparities for LGBTQ youth, especially for LGBTQ youth of color and transgender youth. What do you see as the most urgent needs of this most vulnerable population and how will you measure your success as governor in addressing these disparities?

State Treasurer Steve Grossman. I'm very proud of the Governor who has $38 million in the budget for a variety of mental health services, many of which directly affect LGBT youth and homeless youth and I think that's a budget that we can build on. Even during tough economic times we have to recognize that our most vulnerable populations need to be served on mental health and behavioral health need to be funded adequately.

Juliette Kayyem. I believe a lot of this can be addressed through focusing on kindness. The bullying that occurs against many students that are LGBTQ is unacceptable. It's unacceptable as a legal matter. And as I told you earlier I brought the federal government's first anti-bullying complaint against a school district. It was the football players against the cheerleaders -- but it had a similar focus which was the schools, and the governments that give them money, have the responsibility to make sure its kids are kind to each other . . . I also think straight children of gay parents are also facing discrimination that we can address as well. It begins with focusing on kindness.

Scott Lively. Frankly I agree, that kindness is what the kids need most. I don't think its kind to affirm a dysfunctional sexual identity, that our lives are fluid. If an adult decides they want to identify as a homosexual, bi-sexual, or transgender, that's their choice. But we shouldn't push that on the kids. We should assume that they have the ability to overcome that problem. I was a street kid myself and I knew a lot of people who were struggling with this. Most of them did not want to have a homosexual orientation and if they had had a chance to have counseling for that, they would have taken it. Regarding bullying, I don't think that we should be having bullying policies that force all the kids to be pro-gay when we can solve the problem by teaching them to respect each other despite their differences.

Reaction from the liberal press

After the forum finished, most of the press in attendance -- predictably biased against the pro-family viewpoint -- nevertheless seemed to gather around Lively. If nothing else, he stood out as an independent thinker. The other candidates had generally repeated the same rather mindless pro-"gay" political pandering. As one newspaper reported, "Other than Lively, the candidates agreed on most issues."

Of all the media coverage, probably the fairest came from the Boston University newspaper, the Daily Free Press. It covered the event without noticeable bias.

On the other hand, the left-leaning Springfield Republican newspaper in Western Massachusetts was over-the-top in its bias and near-hysteria in its coverage.

An important lesson for the pro-family movement

Many conservatives, including us, have stated repeatedly that the major factor for pro-family losses on these issues has been the almost universal reluctance of politicians and pro-family leaders to tell the truth. Instead, under pressure they usually sink into a mushy morass of political correctness and moral compromise (e.g., civil unions, "gay" adoptions). In our opinion, that's how we lost the major gay-marriage court cases last year and it's how we continue to lose in legislatures, in courtrooms, and in the public square.

Our people, and particularly our politicians, are deathly afraid of being called names or demeaned by the liberal establishment. It's the road to hell.

Without the truth there are no weapons for a fight, only gradual capitulation. But telling the truth forcefully and fearlessly over and over again is the basis of victory over a movement that depends on lies and disinformation for its success.

It's going to be an interesting political summer in Massachusetts.