How the CIA Broke America

The NSA Wants a Skeleton Key to Everyone’s Encrypted Data

Forget About Siri and Alexa — When It Comes to Voice Identification, the “NSA Reigns Supreme”

Classified documents from th  e Snowden archive reveal the NSA has been developing technology to automatically identify a speaker from the sound of their voice.

A new report indicates the passage of the USA Freedom Act did not prevent the U.S. National Security Agency from collecting 151 million records…

(Updated) Kid's toys are recording and transmitting every conversation 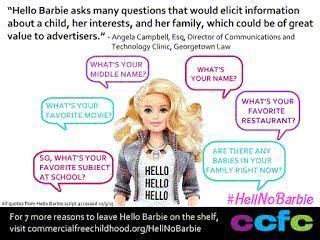 The National Security Agency (NSA) is paying to build backdoors security into the Internet of Things (IoT).

Your USB cable, the spy: Inside the NSA’s catalog of surveillance magic

Who else is involved in global surveillance..


DATA AND GOLIATH: The Hidden Battles to Collect Your Data and Control Your World


NSA can hack WiFi devices from eight miles away


NSA Docs on Malware and Implants

NSA spying damages US economy, may end up ‘breaking the Internet’

Private information stored online by British computer users could be scrutinised by American law enforcement agencies under a wide-ranging new right-to-snoop being pursued by the US government. Federal authorities in the US are using the courts to try to force American-owned technology companies to disclose emails and other data held in the "Cloud" - the vast network of servers where data is stored for customers.

The claim would require companies such as Microsoft, Apple and Google to open up all their electronic records to agencies - such as the CIA, the NSA and the FBI – even if it is stored in Europe rather than on US soil...MORE

NSA Keeps Tracking People Even After They're Dead...


Binney: The ultimate goal of the NSA is total population control

Glenn Greenwald to publish list of U.S. citizens that NSA spied on
Google Staffer Purportedly Involved in NSA Mass Recordings of all Cellphone Calls to and from Bahamas
2014 Bilderburg Membership includes former NSA Directors:
NSA Knew About Heartbleed Bug for 2 Years and Said Nothing
Don’t Trust Google to Protect Email from the NSA
NSA performed warrantless searches on Americans' calls and emails – Clapper

US intelligence chiefs have confirmed that the National Security Agency has used a "back door" in surveillance law to perform warrantless searches on Americans’ communications.

"Particularly notable is a series of secret NSA slides on the program, dated from 2008. The slides are marked “release to” United Kingdom, New Zealand, Australia, and Canada, suggesting XKEYSCORE is accessible to spy agencies in each of these countries. (It is also reportedly used by German authorities.) They show how the NSA collects data on emails, browsing sessions, and what people are searching for online—“nearly everything a typical user does on the internet..MORE”

Behind the Curtain: A Look at the Inner Workings of NSA’s XKEYSCORE

NSA, DEA, IRS Lie About Fact That Americans Are Routinely Spied On By Our Government: Time For A Special Prosecutor

" It seems that every day brings a new revelation about the scope of the NSA’s heretofore secret warrantless mass surveillance programs. And as we learn more, the picture becomes increasingly alarming. Last week we discovered that the NSA shares information with a division of the Drug Enforcement Administration called the Special Operations Division (SOD). The DEA uses the information in drug investigations. But it also gives NSA data out to other agencies – in particular, the Internal Revenue Service, which, as you might imagine, is always looking for information on tax cheats."

The NSA and its British counterpart are tapping popular smartphone apps such as Angry Birds to peek into the tremendous amounts of very personal data those bits of software collect -- including age, location, sex and even sexual preferences, according to new reports from the New York Times and The Guardian.

Dark Government.com: NSA has a collection of FOXACID servers, designed to exploit visitors....Once the QUANTUM wiretap identifies the victim, it simply packet injects a 302 redirect to a FOXACID server. Now the victim’s browser starts talking to the FOXACID server, which quickly takes over the victim’s computer. The NSA calls this QUANTUMINSERT...One particular trick involved identifying the LinkedIn or Slashdot account of an intended target. Then when the QUANTUM system observed individuals visiting LinkedIn or Slashdot, it would examine the HTML returned to identify the user before shooting an exploit at the victim.

NSA intercepts computer deliveries ...including computer monitor cables specially modified to record what is being typed across the screen, USB sticks secretly fitted with radio transmitters to broadcast stolen data over the airwaves, and fake base stations intended to intercept mobile phone signals on the go.

"..[C]lassified documents show that the [NSA]intelligence agency has several means of accessing the internal data traffic of the Society for Worldwide Interbank Financial Telecommunication (SWIFT), a cooperative used by more than 8,000 banks worldwide for their international transactions. The NSA specifically targets other institutes on an individual basis. Furthermore, the agency apparently has in-depth knowledge of the internal processes of credit card companies like Visa and MasterCard. What's more, even new, alternative currencies, as well as presumably anonymous means of payment like the Internet currency Bitcoin, rank among the targets of the American spies."

Time for Answers from the NSA..

In an ironic twist, former U.S. House Speaker Dennis Hastert (shown) has been snared in a federal indictment brought about by the very PATRIOT Act he strongly supported during his tenure as speaker. In the aftermath of the 9/11 attacks, Congress enacted the law purportedly to fight terrorism; however, critics cautioned at the time that it was a major overreach, violating certain portions of the Bill of Rights.

In particular, some warned that the PATRIOT Act would be used by federal authorities for purposes other than to "fight terrorism." Though Hastert, among others, brushed aside such concerns at the time, he has now fallen victim to just such a use of the controversial legislation...MORE

Consider the record. Last week, President Obama told reporters: “I’m comfortable that if the American people examined exactly what was taking place, how it was being used, what the safeguards were, they would say, ‘You know what? These folks are following the law and doing what they say they’re doing.’”

But the NSA audit found that in at least one instance, the agency decided it didn’t need to follow the law and report the unintended surveillance of U.S. citizens. In another case, the FISA court was in the dark about a new NSA collection method for months. When it did learn about it, it promptly declared it unconstitutional...MORE

The National Security Agency has broken privacy rules or overstepped its legal authority thousands of times each year since Congress granted the agency broad new powers in 2008, according to an internal audit and other top-secret documents...MORE

Researchers have demonstrated that it is possible to compromise a driver’s private information stored in the cloud for Usage-Based Insurance (UBI) programs, based on only part of the data collected. UBI programs determine a consumer or fleet insurance premium rate based on several driving parameters that are collected,..MORE

FBI says that citizens should have no secrets that the government can't access: the Orwellian cyber police state has arrived

FBI Director: Government Must Have Access to Your Encrypted Data

The director of the FBI doesn’t want you to use technology to encrypt your personal data. He said that for your safety the feds should have unrestricted access to everything you store in a cloud or a hard drive, write in an e-mail, or send in a text...The U.S. government exercises control over a massive and technologically advanced camera-based surveillance system that has the capacity to keep the urban population of this country under the watchful eye of government 24 hours a day...TrapWire is the name of this network of cameras and other surveillance tools..MORE

"..under the proposed amendment, a judge can issue a warrant that would allow the FBI to hack into any computer, no matter where it is located. The change is designed specifically to help federal investigators carry out surveillance on computers that have been “anonymized” – that is, their location has been hidden using tools such as Tor...MORE

WikiLeaks has published hundreds more files today which it claims show the CIA went to great lengths to disguise its own hacking attacks and point the finger at Russia, China, North Korea and Iran.

The 676 files released today are part of WikiLeaks' Vault 7 tranche of files and they claim to give an insight into the CIA's Marble software, which can forensically disguise viruses, trojans and hacking attacks...MORE

Searching for online articles about privacy is enough to get someone put in an NSA database of “extremists,” according to new revelations published today.

In an article for German news outlet Tagesschau (translation here), Lena Kampf, Jacob Appelbaum and John Goetz reveal how the NSA’s “deep packet inspection” rules, which it uses to determine who to target for deep surveillance, include looking for web users who search for articles about Tor and Tails, an anonymous browser and a privacy-friendly operating system. Those whose Internet traffic patterns suggest merely an interest in Tor or Tails are immediately put on a list of “extremists,” as is anyone who actually uses the Tor network.

“Tor and Tails have been part of the mainstream discussion of online security, surveillance and privacy for years...MORE

Glenn Greenwald, the journalist who broke the Edward Snowden revelations, has come good on his promise that fresh information on the NSA’s mass spying would be forthcoming. Today he reveals that the US government agency routinely intercepts computer hardware such as routers, switches and servers, and fits it with cutting edge surveillance equipment, before sending it back on its way.

In an article for The Guardian, Greenwald notes that the NSA tampers with the hardware, then repackages it with “factory sealing” before sending it off to unsuspecting companies who have no idea it has been intercepted.

Greenwald notes that the practice constitutes “an extreme form of gross hypocrisy,” given that it has been warning companies around the world not to buy Chinese hardware because it may be set up with surveillance technology.

“The illegal we do immediately. The unconstitutional takes a little longer.”

The TSA Is A Milgram Experiment in Obedience

Behind Long Airport Lines, a Chain of T.S.A. Cuts, Missteps and Crises

Audit: TSA Inspectors Only Spend ‘Half Their Working Hours’ on Work amid ‘Increased’ Terror Threat

To Keep The Skies Safe, The TSA Wants To Know What You're Reading

TSA to travelers: Is that a cookie or a bomb?

After flap over removing paper items from bags at KCI, TSA puts an end to practice

Something ominous is taking place at the Transportation Security Administration (TSA) right now, having to do with a more aggressive version of…

Your Govt at Work: TSA feels up CNN Political Commentator

TSA Detains Libertarian Blogger After ‘Seeing Bitcoin’ In His Bag

The TSA orders high explosive from the source of 1993 WTC bombing  In August 2012, the TSA purchased 1,400 pounds of high explosives, the same ones as used in the Murrah Federal Building bombing in 1992, and the CEO of the company was a former TSA director.

TSA: I saw you Naked - and Yes, we were laughing

What to do with America's perverts? Hire them at TSA and pay them to grope: TSA workers touching travelers’ genitals.

TSA's mission creep is making the US a police state

Why is the TSA being allowed to conduct warrantless searches at bus stations and train stations all over America?  According to an article  in the Guardian, the following motto is displayed at the TSA’s air marshal training center: “Dominate. Intimidate. Control.”  Why is there no outrage over this?