Pro-family groups out in force for huge "gay marriage" battle in Hawaii Legislature starting Monday. Special session called by Governor. Huge energy across the state to stop it.

The battle to stop the Hawaii Legislature from imposing "gay marriage" on that state comes to a head next week. The last two months have seen a huge, spontaneous pro-family uprising by churches, civic groups, and individual citizens across the state -- coming out against this outrage in a way that we've never seen anywhere else in America.

Above: Hawaii citizens for traditional marriage outside the State House.

Special session of Legislature convenes Monday - just for this!

This Monday, October 28, the Hawaii Legislature goes into a special 5-day (or longer) session specifically to take up the so-called Hawaii Marriage Equality bill which would impose same-sex "marriage" on that state. As we reported last month, the pro-gay marriage governor, Neil Abercrombie, called the session after a "gay marriage" bill failed to get any traction during the regular session which ended in May. And this time, homosexual groups have been focusing like a laser beam to turn the Legislature around on this and force it through.

Pro-family forces coming forward on their own in big numbers!

But in the last two months large numbers of people across the state in their churches, civic groups and as individuals have spontaneously mobilized and become active against this in a way that is quite unprecedented. In fact, the pro-family activism is completely dwarfing the public activity by the homosexual movement on this issue. For example:

Pro-family rally: On October 6, the United Fellowship of Churches a pro-traditional marriage rally at the State House that attracted about an enormous overflowing crowd: 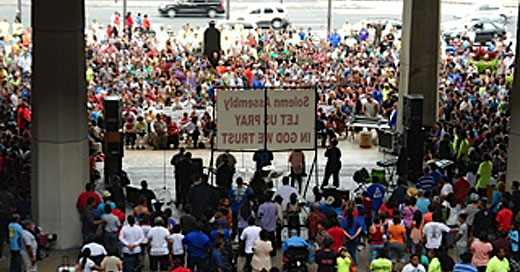 What's particularly unusual is that in this battle, Hawaii does not have any central statewide pro-family group coordinating the efforts to stop the bill. Such efforts usually include statewide fundraising, strategizing, mobilizing people, etc. At best, there is a loose confederation of churches and groups that has met occasionally and mostly serves as an exchange of ideas. That is usually a recipe for complete disaster in a "gay marriage" battle against the homosexual juggernaut.

But this time the sheer energy of the pro-family people seems to be making up for it. There's no question that the pro-family forces have been having a big impact across the state.

MassResistance materials being used across Hawaii

MassResistance has been working with Hawaii activists on this bill since early September. By all acounts, our material has gone across the state.

As pointed out above, there are many groups fighting the bill and no overall coordinating group running things. As a result there is a divergence of strategies being used. The strategies being pursued fall into 3 categories:

(1) Opposing the bill directly, i.e., same-sex "marriage" is immoral, destructive for society, families, and children, and the bill must be voted down.

(2) Demanding a vote of the people instead of a legislative vote. This would seem to be at some variance with the 1998 Constitutional Amendment, which gives the Legislature the power to define marriage.

(3) Focusing primarily on strengthening the religious exemptions, even to the point of including all people of faith, not just churches.

Whether this divergence of strategies versus a single stragegy is good or bad, time will tell. But there's no shortage of energy being expended on all three of them.

Some of the highlights of this pro-family battle over the last several weeks include:

The Hawaii Republican Assembly (HIRA), led by super-activist Tito Montes, is the most aggressive and fearless group educating people about the homosexual marriage agenda and how it will affect them and their children in schools. HIRA has used radio, literature, the Internet, and organizing tactics to get the word across Hawaii. They have also been the primary funder for printing and distributing MassResistance materials across the state. HIRA, like other Republican Assembly groups across the US, is not officially connected to the GOP. And of course, they have angered squishy "conservative" legislators with their direct and uncompromising approach.

Although pro-family groups haven't taken the lead roles as they have in other states, they've nevertheless been doing important work. For example, the Hawaii Family Advocates has posted good information on the bill. On October 11 they organized a State House press conference, "Let the People Decide" -- calling for a statewide vote on "gay marriage" instead of legislative fiat where the people feel their voices are not heard.

Major protestant churches in Hawaii have stepped up in a huge way. They've done so much we can't list it all. They've organized rallies and prayer groups, maintained lists of legislators to call (with their current positions), and educated people on the issue. Many of them also link to MassResistance information.

Here are a few examples of what the big churches have been doing:

The Catholic Diocese of Honolulu

The Diocese of Honolulu has also stepped up with unequivocal support for traditional marriage. Back on August 22, Bishop Larry Silva released this letter to Catholics in Hawaii that made it very clear where Catholics should stand. He said:

If same-sex marriage becomes the law of the land, its implications will go far beyond the relationship of this or that couple. There will be long term and definitive changes in our entire culture. If same - sex marriage becomes the law, it will become “normal” or the norm for our land. If one may marry without discriminating whether the partner is of the same sex or the opposite sex, then such “non - discrimination” will become the norm in other areas, too. Our school textbooks will have to portray sexual attraction as normal, no matter to whom one is attracted. When schools have dances, boys will have the choice of inviting a girl on a date or another boy on a date. Our youth, whose sexual identity is formed over time, will be forced to decide prematurely if they are heterosexual or homos exual, thus curtailing normal sexual maturation, with all its stumblings and challenges.

On October 13, Bishop Silva published a second letter on this issue. Along with that, he included contacts to state representatives and scriptural references to homosexuality.

In addition, Catholics in Hawaii have told us that postcards for state reps on this issue are being distributed on the sidewalks outside of every Catholic Church in the state on Sundays.

Smaller churches across Hawaii have been doing whatever they can to get the word out and get people energized on this issue. It's really refreshing to see.

Mormons largely on the sidelines. The Mormon churches have not been involved at all, which is a big change from the past when the Mormons were at the forefront of these issues. Instead, they've instructed their members that they can act on their own, either for or against the bill, but they should support strong religious exemptions. In the 1990s, the Mormon churches in Hawaii were a primary force that propelled the pro-family side to victory in homosexual civil union statewide battles.

Other pro-family help from outside of Hawaii

Phil Lees, a well-known educator from Canada, came to Hawaii and spent much of October speaking at churches and other venues across Hawaii, warning people about how same-sex "marriage" has affected the educational system in Canada. What he's said is pretty chilling, even to us!

Late last week it the National Organization for Marriage (NOM) announced that it would be funding television ads throughout Hawaii. According to news reports, the ads will be focused on persuading the Legislature to let the people vote, rather than have the Legislature decide on same-sex "marriage".

Renowned University of Texas researcher Mark Regnerus is also coming to Hawaii next week to help with the effort, according to activists we've spoken with. His recent study on the detremental effects of same-sex "parenting" on children has received worldwide attention.

And the mainstream media, both TV and newspapers, have published a steady stream of biased articles and feature stories portraying this as inevitable, and a positive thing for society. For examplle, this posting of a female athlete "marrying" her partner is what the public is now seeing a lot.

Ever since the Governor announced the special session, one thing the pro-family movement has agreed on completely is plans for a huge pro-family rally at the State House on the afternoon of the session's first day.

Also on Monday, the first of two public hearings is likely. There will be one each for the House and Senate. These are sure to attract an enormous pro-family turnout!

Although it's a special session for only one bill, citizens are being told it will be treated like other bills. According to the Governor's website, during a special session all constitutional and legal requirements that govern the Legislature must still be met. The House and Senate internal rules are also the same, both of which require a public hearing before any bill is passed. Thus there will be two public hearings, two committee votes, and two floor votes in order for the bill to get through.

So beside the public hearings, look for a flood of people to the State House for  rallies, lobbying, committee votes, etc. If it's anything like the special "gay marriage" Constitutional Convention was in Massachusetts in 2007, it will be a zoo. We won't be surprised if the legislators decide to start bending the rules after a day or two to short-cut the system.

BELOW: Organizations across Hawaii are promoting the big October 28 State House rally:

What will happen next week? Will we win?

This bill started out at the beginning of this year it wasn't taken very seriously. But now it's in big danger of passing.

Back in February during the regular session, the bill had such weak support that the Governor gave up, and decided to try again in a special session several months later. That was a shrewd tactic. Since then, while our side has been doing its activism, the homosexual movement has spent over $125,000 to apply the kind of hard, high-pressure lobbying that it has honed across the country since the Massachusetts days ten years ago.

And that seems to have worked quite well. Right now, the bill will likely pass easily in the Senate and by a small margin in the House, where the real battle is taking place. Insider information we have is that right now, leading into this tumultuous week, we're still about 3-4 votes behind, but apparently gaining ground.

As politics go, we can still win through the sheer force of numbers of angry people. But our side still has no money and no well-organized, systematic, central lobbying effort. That must be overcome by sheer energy.

National Organization of Marriage (NOM), which has just gotten involved, is the only national pro-marriage group that has money to spend on these fights. Unlike the Left, the rest of the conservative establishment is cowardly and/or has retreated from this battle.

It's nice that NOM is now stepping in, during the last week, to buy television ads. But if they had come in two months ago and instead funded a hardcore lobbying effort with that same money, that would have been much wiser. Unfortunately, NOM is much more comfortable fighting media wars instead of the inside-baseball lobbying wars.

Right now, our strength is in numbers of dedicated people. Look for a huge turnout in both public hearings. We wouldn't be surprised if hundreds of pro-family people show up at each one, determined to stay all night if necessary, in addition to flooding the halls and offices of the State House.

Thus, although a rally and public hearing turnout usually isn't enough, we think that if our side can generate enormous pressure on the House members supporting this, letting them know that they will all face primary challengers backed by determined groups of people, this can be stopped. We've seen it happen before (e.g., in Maryland in 2011).